Coaching Your Salesperson through a Deal that is Pushing. 3 Minute Role Play with John McMahon, Board Member at MongoDB, Snowflake, and Sprinklr

“Bad news. The deal is slipping to next quarter.”

We have all been there. The end of the quarter is just weeks away. The team is forecasting 105% of goal with 60% already booked. However, 20% of the forecast is dependent on that “whale” account. Your best salesperson, who owns the account, delivers that bad news. “They're pushing it off.”

As a manager, what is the best approach to coaching our salesperson through this situation?

To discuss the question, I called on my long time mentor and Stage 2 Capital LP, John McMahon. John currently sits on the board of directors for many software unicorns including MongoDB and Snowflake. However, he is most known for his disciplined approach as an operator, running a handful of highly successful global sales teams throughout his career, GeoTel, Bladelogic, BMC and PTC, which he scaled from $100M to $1B in revenue. Revenue! Not market cap.

I was fortunate to have John as my mentor during the HubSpot journey. He and I spent four hours a month together. He hammered me with questions. Insightful questions, probing questions. It was great. HubSpot had grown to the size where it was becoming more and more difficult for me to anticipate the challenges on the horizon 6 to 12 months out. Yet, getting ahead of those challenges was a huge part of my job. I was thankful for John’s insights and coaching during those years.

In today’s 3 minute role play, John demonstrates how a sales manager should coach a salesperson when a deal they were forecasting is now slipping to the next quarter. After the role play, he and I reflect on the best practices he utilized.

Have a listen. The tone and demeanor is important. John is a pro at this. A summary of the best practices is as follows:

1) Notice John’s immediate response when he hears the news: “Why?” You can feel the urgency and seriousness of his tone.

2) When a deal is forecasted and then ends up pushing, it is usually the fault of both the salesperson and the sales manager. The salesperson didn’t ask deep enough questions to discover and quantify the pain. The rep typically rushes through the first stages of the sales process so they can present their product. Good reps slow down the early stages of the process to understand the customers’ environment and quantify their pain so they can use the information in a cost justification later.

3) The sales manager didn’t challenge the salesperson hard enough during the deal pursuit with the same set of discovery and quantification questions. The WHY questions. Avoiding the late stage push depends on thorough discovery at the beginning of the deal. Slow down.

4) In most pipeline reviews, managers start with the opportunities that are about to close. Given the above point, we should question whether that approach is optimal. Instead, consider starting pipeline reviews with the newly created opportunities. The potential for a sales manager to influence how an opportunity develops is far greater in the early stages. If the manager has done their job, there is little to discuss or coach on in the final stages of an opportunity.

5) In many cases, the salesperson confuses “surface pain” with a “well developed pain”. John did a great job in the role play challenging me on how well I understood the buyer’s pain. In summary, John says a well developed pain is “quantified” and “implicated”. Questions that he used that we can consider as managers are:

6) I have personally asked over 1000 sales teams about the most common reason why they lose deals. It isn’t budget or competition. It is a sense of urgency. The implications question above is critical to ask to develop the urgency, to change priorities for the customer. Almost 100% of sellers ask prospects about budgets. But only a few ask about the implication of not solving their problem or pursuing their opportunity. Neil Rackham’s work in the famous SPIN Selling was probably one of the first and most rigorous codifications of this approach. 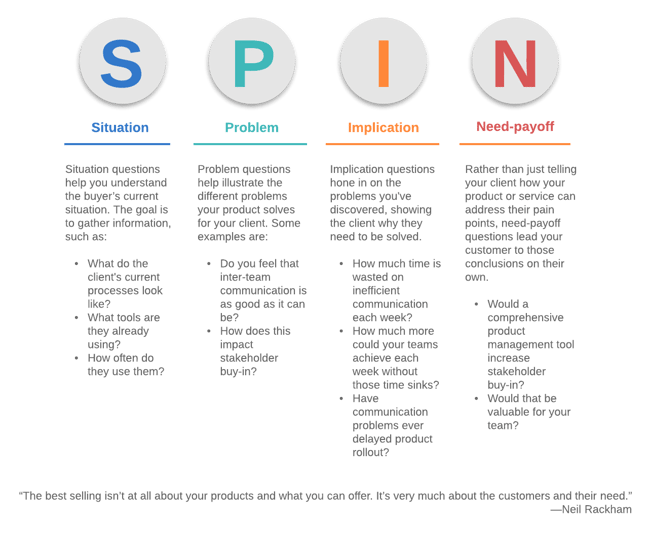 7) John’s approach in the role play helps us to further understand the power of a simple Buyer Journey framework to scaffold these discussions with salespeople. John comments how important it is for a salesperson to understand the unique differentiation of their solution and its applicability to how the prospect perceives their problem. If we can get prospects to perceive their problems in a way that only we can solve, we will win a lot of deals. The orange boxes below are the components of the buyer journey where this unique differentiation is captured.

Hopefully John’s role play sparked a number of ideas on how to up our game in coaching our sellers through this common situation.

Mark Roberge is a Co-Founder and Managing Director at Stage 2 Capital and a Senior Lecturer at the Harvard Business School. Prior to these roles, Mark was the founding CRO at HubSpot, where he scaled annualized revenue from $0 to $100 million.